Create an Account - Increase your productivity, customize your experience, and engage in information you care about.

Perhaps one of the planet’s most violent natural disasters, volcanoes can devastate surrounding populations and impact cities, industries, and ecosystems up to 100 miles away. These geographical features rise out of the Earth’s crust and act as a vent for the molten rock and gases that reside beneath them. In the event of an eruption, the pressure built up underneath a volcano becomes so great that the volcano vents and releases lava, rocks, poisonous gases, and ash in one or several explosive events. Eruptions can result in a wide variety of subsequent hazards, including lava flows, earthquakes, debris flows, flash floods, wildfires, and ashfall that can temporarily alter the planet’s climate.

With such a destructive potential, multiple local, state, and government agencies have worked tirelessly to ensure that emergency responders and other response agencies are adequately prepared for an eruption. At the forefront of these efforts is the U.S. Geological Survey (USGS). Delegated the task of monitoring and issuing warnings of potentially devastating volcanic activity, the USGS currently leads the field in volcanic research and operates five volcano observatories. From these five observatories, the USGS monitors approximately 50 volcanoes across the country. The USGS uses information collected from these observatories to issue Volcano Alert Notifications.

Currently, the USGS uses a four-tiered volcanic alert-notification system to inform both the public and other agencies about a volcano’s status. These alert levels are issued conjointly with an aviation color code that is intended for use by the aviation sector. Notifications released by the USGS can be issued for both increasing and decreasing volcanic activity and are published with a more detailed statement about the nature of the activity. The table below provides more information about each of the four volcano alert levels.

Additional information on both the volcano alert levels and the aviation color code can be found in the USGS Alert-Notification System for Volcanic Activity Fact Sheet. Also, you can subscribe to the USGS Volcano Notification Service to receive notification emails. This free service can be customized to send notifications for specific volcanoes.

As with preparing for any other natural disaster or emergency, it is of the utmost importance that both you and your family have an emergency communications plan. Having a preexisting plan will ensure that you and your family will know what to do during and in the immediate aftermath of an eruption. Having an emergency communications plan will also ensure that you and your family members will know how to contact one another and where to reunite in the event that an eruption occurs when you are not together. In addition to having a plan, it is also crucial that you have a fully stocked disaster supplies kit.

Individuals living in the immediate hazard zone surrounding a volcano will need to include extra items in their kits to ensure that they are adequately prepared for an eruption. These items include goggles and disposable breathing masks for each member of your family, plastic sheets and tape to seal off your household during heavy ashfall, and a spare air filter for each vehicle. Preparing a disaster supplies kit prior to any volcanic activity will help to ensure that you and your family are prepared for an eruption.

In the event of an eruption or other major volcanic activity, it is crucial that you closely monitor all forms of media, including television, radio, and social media. Officials will update hazard zones and issue evacuation orders as the eruption progress. Closely monitoring media outlets throughout the course of the eruption will ensure that you will have adequate time to evacuate or seek shelter.

If you are near or downwind of a volcano during an eruption you may be at risk from a number of hazards. One such hazard is lava flows. These flows generate immense heat and have the potential to destroy anything in their path. Although slow, it is important to stay away from fresh lava flows as the accumulation of methane gas underneath the flow can result in small explosions. In addition to lava flows, debris and mud flows can also pose a risk to individuals near a volcano during an eruption.

Capable of traveling at over 20 miles per hour, debris flows can sweep away vehicles, destroy homes, and bury people in a matter of minutes. As a result, it is crucial that you stay away from areas where debris flows are likely to travel such as valleys, riverbeds, and other low lying areas. If you do receive warning of a debris flow seek high ground immediately. If you attempt to cross a bridge when seeking higher ground, look upstream prior to crossing. If a debris or mud flow is approaching do not attempt to cross as you could easily be swept off the bridge by overflowing debris currents. In addition to debris and mud flows, individuals in a volcanic hazard zone during an eruption may also be at risk from ashfall.

Volcanic ash can pose an immediate risk to your health. It is best to seek immediate shelter and minimize your exposure to outside air by sealing off all non-essential doors, windows, and vents. Furthermore, you should minimize the use of household heating or cooling systems as these systems can draw ash into your home. Volcanic ashfall can also severely reduce visibility as well as damage vehicle filters and engines. As a result, driving is not advised unless absolutely necessary. Visit Ready.gov for additional information on what to do during a volcanic event.

Following an eruption, volcanic activity can continue to increase or decrease for anywhere from a few weeks to up to several years after the event. The activity level of the volcano will dictate the actions you take in the immediate aftermath of a volcanic eruption. Resultantly, it is important that you continue to monitor media outlets to receive the most accurate and up to date information from officials. If, after an eruption, you feel it is unsafe to re-enter your home or have been ordered to evacuate, you should seek safety at the nearest public shelter after the ashfall has settled.

An immediate concern after an eruption is ashfall. The accumulation of volcanic ash can pose a breathing hazard to both non-healthy and healthy individuals. Resultantly, individuals should wait until ashfall has stopped to go outside. Additionally, the accumulation of ash can pose an immediate risk to structures and roofs as the weight of the ash can cause collapse. Prior to making any efforts to clean up ash, it is important to research cleaning methods, acquire the appropriate safety equipment, and make a plan. For additional information on volcanic ash, visit the Volcanic Ashfall Impacts Working Group website. 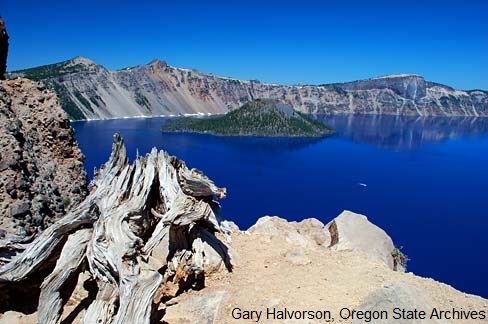 With one of the highest concentrations of volcanic vents in the Pacific Northwest, Oregon is at risk from a number of volcanic hazards. Home to one of the most notable volcanoes in the country, Klamath County is at risk from volcanoes located on the crest of the Cascade Range as well as volcanoes in the Northern Basin and Range. Volcanic hazards with the potential to impact Klamath County include ashfall, lava flows, debris flows, flooding, landslides, and earthquakes. These hazards are particularly concerning to residents of Klamath County because of the threat that Crater Lake poses to the area.

Unique among volcanoes in the Cascade Range, the iconic caldera that is now known as Crater Lake is the result of the collapse of Mount Mazama during its eruption approximately 7,700 years ago. Because of this eruption and the lasting changes it had on the surrounding geology, accurate predictions of the extent of future eruptions cannot be accurately determined. However, volcanologists suspect that future eruptions may lead to hazards, including hydrothermal explosions, ashfall, pyroclastic surges, debris flows, landslides, rockfalls, and earthquakes. Currently, volcanic and seismic activity at Crater Lake are monitored by four seismometers located on Wizard Island and around the lake. For more information on Crater Lake, visit the USGS Volcano Hazards Program webpage or the Crater Lake National Park website.